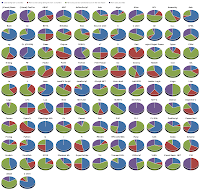 The pie chart above illustrate in what category a programming language was most commonly placed. The color coding used is:

Some languages are infrequent in all of the four categories. For example, the table below shows that although 90 respondents have used Visual Basic in last 12 months, only 1 has used ABC. Because there are so few responses for ABC, the pie chart (above) for ABC is associated with a lot of uncertainty.

Overall, C was the language most frequently selected for any of the four categories (not shown, but can be found by looking at the "Total" column). Java, C++ and Python followed next. As pointed out by malakon, because the languages were in alphabetic order (and not random order) in the survey, there is some bias present in in favor of more respondents selecting programming languages starting with A.


The table below is sorted in descending order according to how many times a language had been used the last 12 months. Congratulations, JavaScript!


In the table below, the programming language that most respondents plan to use in the next 12 months is represented. It seems we were right in including Clojure in the survey. At the same time, a lot of redditors complained that some of their favorite languages where not included. Someone with time to spare and JavaScript skills should make a better implementation of the programming language questionnaire in the future (thanks grayvedigga).

The table below shows languages that have been used, but are not planned to be used by respondents in the near future.